Funeral services but not as we know it 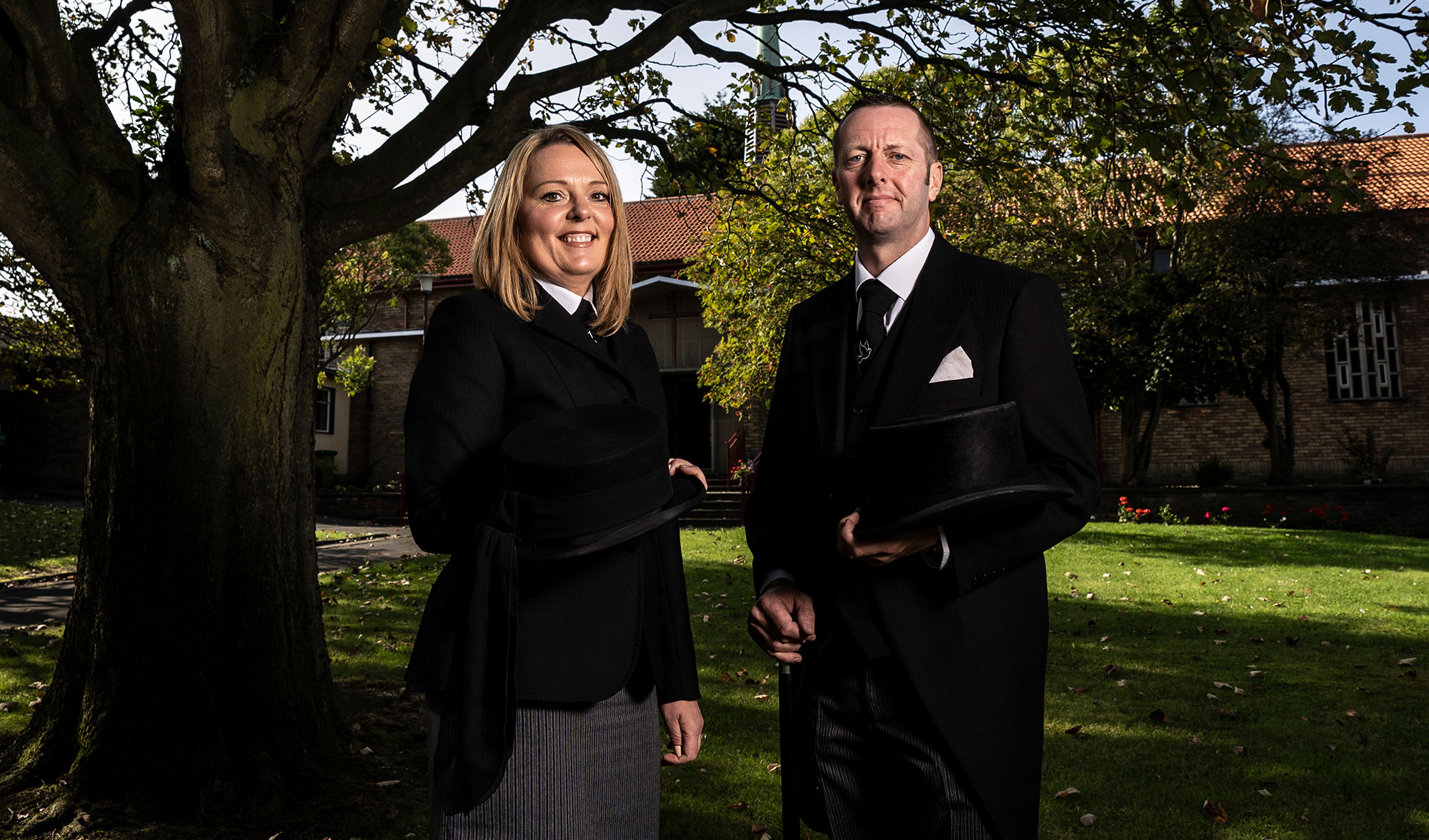 There was no more singing allowed. Churches were closed and the deceased were either taken straight to the crematorium or graveside with very few mourners allowed.

John Delanoy and Julie Stout are passionate about the funeral industry and giving people the send-off they want – their best final farewell. Editor Leanne Fawcett finds out more.

Two things are immediately evident when I down with John Delanoy and Julie Stout to talk about their new partnership, Delanoy Funeral Services.

The first is, they really care about what they do, in fact love it. The second – even in these early days of formally working together, their partnership works. Their business dynamic is immediately evident and I can see why so many families are choosing them to arrange their loved ones’ funerals. The other thing to point out is that, unlike John, Julie doesn’t come with a background in the funeral industry. Julie is a marketeer with 25 years’ experience working for companies including Yell and various radio groups, helping companies promote themselves across a range of media platforms including TV and radio.

So I’m intrigued to learning more about why the 47-year-old, who continues to run her own business, Just Out Marketing, decided to move into the funeral business, and how her partnership with John – who is fifth generation is his family’s business – came about.

Julie, who is married to Reece and is ‘mum’ to dogs Coco and Sophie, said: “Through my own business, I’d been working with companies in the funeral industry and had some ideas that I thought could really work and bring something different, better, to the way funerals were conducted and captured. At the same time, my friend Sharon’s dad died and John did the funeral. Sharon loved the way John worked, and how personal his approach was, and knew I was keen to pursue the ideas I had. She thought there was an opportunity for us to work together and introduced us.

“Then in March the national lockdown because of the coronavirus pandemic was announced and families were no longer able to give their loved ones the send-off they wanted to. There was no more singing allowed. Churches were closed and the deceased were either taken straight to the crematorium or graveside with very few mourners allowed.”

John, who is married to Susan and has two children, Chloe, 16, and 12-year-old Matthew, was aware that in such unprecedented times, helping families say goodbye was going to be a tough ask. Not least because in some cases, husbands, wives, sons and daughters weren’t allowed to attend the funeral because of the risk of the virus spreading. John, whose family business dates back to 1897, said: “I’d always been passionate about helping families give their loves the send off they deserve and want, but in such difficult times it was even more important.

“Julie and I had started working together to look at new ways of helping people say goodbye and we’d also been thinking about how we could offer families beautiful keepsakes which would be something lasting for the family to treasure.

“I was asked to conduct the funeral of a lady from the area whose family were in Canada, so weren’t able to attend. I ask Julie to film it, to produce a video in a respectful way which we could give to the family so they felt like they’d been a part of it. They loved it so we decided to look at other ways of working together.”

It was the response Julie got to a video made of the funeral of popular Peterlee taxi driver, Ian Ridley, on behalf of Chevron Taxis that highlighted her potential of creating lasting memories for families. The funeral saw over 100 taxi drivers line the streets of Peterlee to say their goodbyes and such was the quality of the video that many of the regional media outlets contacted Julie and Chevron to ask for permission to use the footage. The video got almost 60,000 views.

Working with John on other projects, Julie realised she’d discovered a whole new passion and that this was where her future lay. She also knew she wanted to work with John in a more official, long term capacity so approached him with the idea of forming a new partnership.

With John’s family business fully established within the East Durham community, John and Julie decided to re-brand and from there, Delanoy Funeral Services was born.

The business was officially launched on August 10 – a date chosen specifically as it was Sharon’s birthday, who had introduced John and Julie – and to date their launch video has had over 70,000 views. And to mark the office opening of their new ‘home’ on Oakerside Park in Peterlee, John and Julie made the trip across the A66 to the Lakes where they’ve had a more official promotional video made to promote their new partnership.

John is the first to admit that Julie has made a huge difference to the way he works, and families agree. “I’d been in the business from the age of 16 and took over from my mam around 12 years ago. By then it was fifth generation, and although it was fully established in the area, it needed freshening up, modernising. With Julie’s fresh eyes and the re-brand to Delanoy Funeral Services, we looked at new ways for people to say goodbye whilst still using many old traditions which were at the heart of the business.

“With each funeral we are asked to conduct, we sit down with the family to make everything as special as we can for them. Having Julie alongside me has made such a difference – like me, she really cares, but because of her personality, she has a knack of making families feel relaxed.

“Funerals are always tough but that doesn’t mean they can’t have some personality, a celebration of the deceased’s life as much as an emotional last goodbye.”

Julie adds: “Just last week, I went out to see a family for their mam’s funeral, and we were chatting about what kind of person she was. The things that made her unique. Her daughter said her mam loved purple eye shadow, always wore it, so I suggested they have a purple casket. They loved the idea, and John and I also wore purple ties.

“The family came up to me afterwards and said they loved everything we’d done and really made them feel like it was a celebration of their mam’s life and it would have made her smile. That’s really what we’re trying to achieve; creating memorable and lasting tributes to people and giving them the send-off they’d want.”

So, what does the future hold the newly created Delanoy Funeral Services, which also has two funeral homes in Easington, including the original premises at West View House?

John said: “With the opening of our third office, we’re ideally positioned to grow the business across East Durham and the surrounding villages. And it’s this area that very much remains our focus, although we are able to conduct funerals across the region upon request.

“Julie and I are both local, me Easington and Julie Peterlee, so our community is us. We know the people here and I think that counts for a lot. The business has been built on recommendation and word of mouth and having Julie on board, very much enhancing the services we’re able to offer our customers, has already made a real difference.”

Julie added: “For years I have worked in marketing and invested a lot in my own business, but none of it compares to what I’m doing now. I love it and believe what we’re doing is changing the face of the funeral industry, and the experiences of families across the area, for the better.”