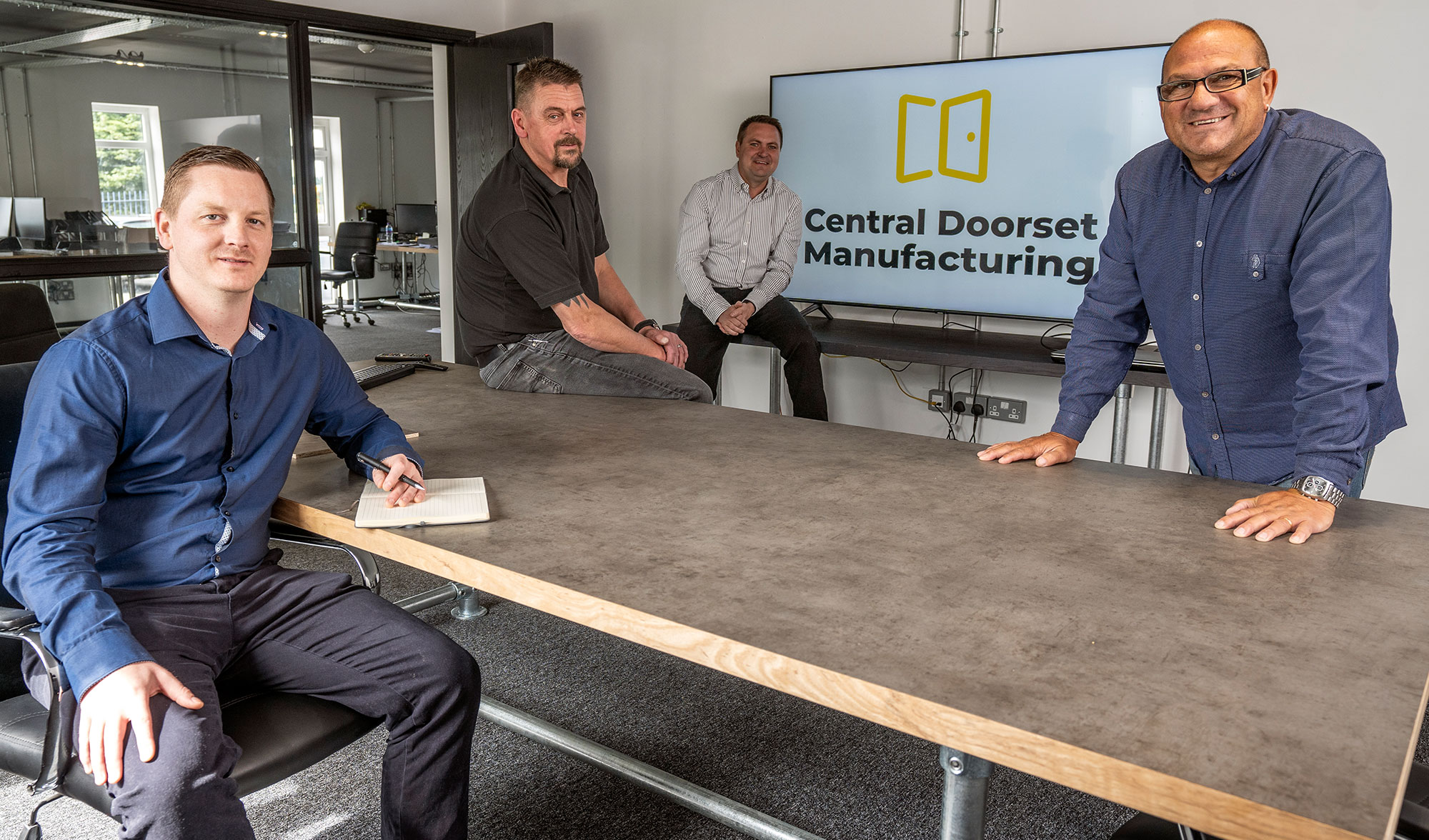 Our move to Peterlee was driven purely and simply by growth. 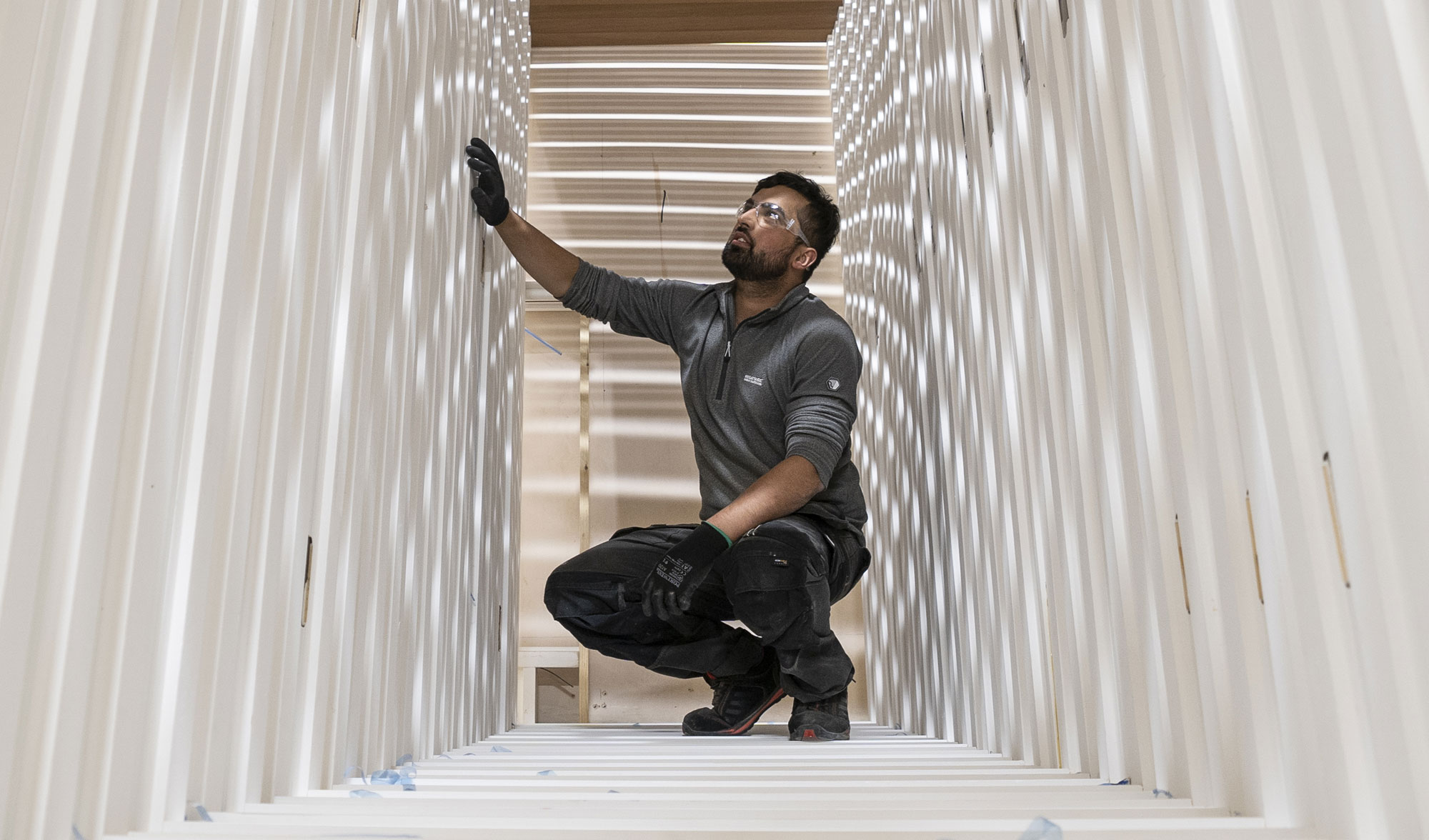 Earlier this year Central Doorset Manufacturing relocated its fast-growing business into the former Dewhirst building on the North West Industrial Estate in Peterlee.

Just seven months on, the company now employs 25 people and has smashed initial targets, putting it on track to achieve £4m turnover in 2022. Editor Leanne Fawcett dropped in to find out more.

The former Dewhirst building in Peterlee has been an iconic facility in the town since the days when clothing manufacturing was the area’s bedrock industry, employing thousands of people.

However, in 2019 when then occupier Impressions Retail moved out, it became vacant and thus it remained until, with the help of Business Durham, Central Doorset Manufacturing moved in.

The company was previously based at Seaham Grange Industrial Estate, however thanks to several national contract wins and growth which far exceeded expectations, founding directors Martyn Sandison and Scott McIlvaney decided to look at alternative premises.

The duo looked all over the region and at one point were considering a move out of County Durham to premises in Washington, however rates for property in the area were too high.

But when they stumbled upon the 25,000 sq ft building on Mill Hill, they knew it ticked all the boxes.

Director Martyn Sandison said: “Our move to Peterlee was driven purely and simply by growth.

“When we launched in 2018, Scott and I set what we though were realistic projections. However, by the end of year one we were manufacturing four times as many doorsets as we expected and we realised that at the rate we were growing, our existing premises at Seaham Grange Industrial Estate would quickly reach capacity.

“We started looking at alternative facilities and found the former Dewhirst building, which was standing empty. The space was perfect and a subsequent conversation with Business Durham identified that our move could be supported by a grant from the County Durham Growth Fund. We were lucky enough to secure £70,000 which was a massive help and in February we moved in.”

The building required a significant amount of work to fit it out ready for the Central Doorset Manufacturing team to move in, however because of circumstances including several members of staff testing positive for Covid-19, the move was fast-tracked and in February they moved in.

Since then, Martyn, Scott and the supporting management team including Billy Qualie, James Smith and Stuart White have worked around the clock, installing LED lighting throughout the building, knocking down offices and rebuilding them, creating a new boardroom and building desks with the wood left over from the doorsets. They also have plans to create a customer showroom in the coming months.

So, despite the challenges brought about by the coronavirus pandemic, which included a three-month lockdown at the start of 2021, how are things going for the team?
Martyn added: “Things couldn’t be better really.

“We have a full order book for the rest of the year and that’s in large part down to word of mouth. Since the Grenfell disaster, there is a high demand for fully certified doorsets. Thanks to our strong supply chain, we are securing big contracts with construction companies that are leading on rebuilding and redesign, and in this new facility, we can actively target the larger contracts which previously would have been unrealistic.

“I think it’s also fair to say that we have benefited from the fact that some businesses haven’t been able to survive the coronavirus pandemic, so their customers have come to us. This has resulted in our workforce doubling from 12 to 25 since February with further recruitment ongoing through the rest of 2021.

“As things stand, we have the capacity to produce around 450 doorsets per week and we are currently operating at around 60 per cent of that, so there’s definitely scope to grow.”

Scott McIlvaney, who manages Central Doorset Manufacturing’s sale team, which is based in Scotland, said: “Our customer portfolio is growing rapidly but we know we still have the capacity to bring in more work.

“Our sales team are looking for opportunities up and down the country and we are confident that over the coming months we’ll be successful in securing more contracts. That means that if we’re to achieve our ambitions of taking growth from £2.3m this year to £4m next year, we’ll also have to recruit the right sort of people. That in itself is a challenge as we want to bring in those people who share our vision for the future – the reward is those people will be given the opportunity to progress through the business and really forge a successful career for themselves.”

Central Doorset Manufacturing’s commitment to its staff means that every member of the team is going through an apprenticeship, with the level depending on their experience and role within the business. It’s a policy that has proved effective for Martyn and Scott, giving them the opportunity to determine where best each employee sits, and also for the individual to play to their own strengths and passions.

Martyn added: “Unlike many other employers who recruit for the apprenticeship, we do things the other way round. We recruit the person first, then put them through six months of internal training before identifying where they fit best in the business and therefore which apprenticeship is best for them. It means we’re not wasting time putting people through apprenticeships that won’t be completed or aren’t right, and for the individual this process gives them the chance to train in an area that they genuinely enjoy.

“It’s such an exciting time for the business and we are all relishing our development and growth here in Peterlee.”

AT A GLANCE : CENTRAL DOORSET MANUFACTURING